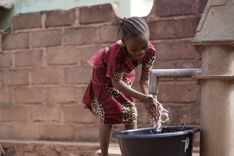 A new milestone is achieved for the Kano State Agro Pastoral Development Project with the rehabilitation of the Watari Irrigation Scheme.

In January, a new milestone was achieved for the Kano State Agro Pastoral Development Project when the contract for the repair and rehabilitation of the Watari Irrigation Scheme was awarded to Messrs. Hajaig Nigeria Limited.

The Watari Dam was constructed more than 40 years ago, and this is the first time in more than two decades that it is undergoing major repairs. Its dilapidated state has rendered farming activity during dry season nearly impossible, costing the livelihoods of more than 2,000 farmers as only half of them are able to cultivate their crops twice a year. This has led to nearly half of the existing farmland being not in use, compounding the economic loss for these farmers.

The irrigation scheme, which is situated downstream of the Watari Dam, in Bagwai Local Government Area of Kano State, has potential to irrigate 2,600 hectares when fully operational. Work is underway, with the first phase successfully completed in March and the facility expected to be fully repaired by end of July 2021.

The plan includes the repair of gully erosion on the dam’s embankment, repair and desilting of main canal and drainages as well as desilting and repair of the night storage reservoir. With the completion of phase one, water from the dam is now available for irrigation purposes.